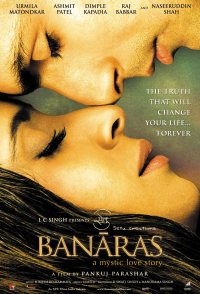 Shwetambri Nath lives a wealthy lifestyle in the holy city of Banaras in India with her mom, Gayetri, and dad, Mahendra. She is now of marriageable age and has a young man, Satpal Shukla, who is also the Police Inspector in the area, who would like to marry her. But Shwetambri is attracted to an orphan, Soham, of a lower caste who lives with a woman called Dadi who is a sweeper by profession. Nevertheless, Shwetambri continues to meet with Soham on the pretext of learning music, and introduces him to her parents, who instantly disapprove of him. When Shwetambri refuses to marry anyone else, her parents relent and get her formally engaged to Soham, especially after learning that he may not be of a lower caste but of an unknown caste and has no blood relationship with Dadi. Shortly before the marriage takes place, Shwetambri's life is turned upside down when Satpal informs her that Soham has been killed. In her grief, she loses her mind and becomes a loner. Her dad asks a childhood ...