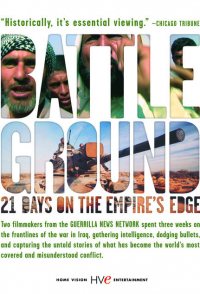 In late 2003, two filmmakers from the Sundance award-winning Guerrilla News Network spent three weeks on the frontlines of the simmering guerrilla war in Iraq, gathering intelligence, dodging bullets, and capturing the untold stories of what has become the world's most covered, and misunderstood, conflict. BattleGround is an irreverent journey that will challenge the orthodoxies of Left and Right, and highlight the humanity of all sides of the conflict. BattleGround will be a critical film for anyone who wants to understand the powerful forces that are sucking America deeper and deeper into a Middle Eastern quagmire. Is Iraq our generation's "Bright Shining Lie," or is it the frontline in a global battle for national survival? Or is to some combination of both?