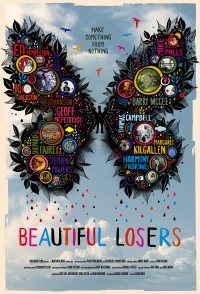 The greatest cultural accomplishments in history have never been the result of the brainstorms of marketing men, corporate focus groups, or any homogenized methods; they have always happened organically. More often than not, these manifestations have been the result of a few like-minded people coming together to create something new and original for no other purposethan a common love of doing it. In the 1990s, a loose-knit group of American artists and creators, many just out of their teens, began their careers in just such a way. Influenced by the popular underground youth subcultures of the day, such as skateboarding, graffiti, street fashion and independent music, artists like Shepard Fairey, Mark Gonzales, Spike Jonze, Margaret Kilgallen, Mike Mills, Barry McGee, Phil Frost, Chris Johanson, Harmony Korine, and Ed Templeton began to create art that reflected the lifestyles they led. Many had no formal training and almost no conception of the inner workings of the art world. They ...