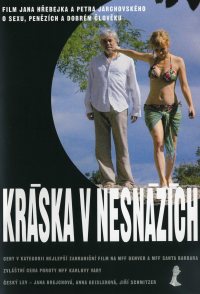 A flood in Prague has damaged Marcela and Jarda's home. He behaves boorishly over their son's asthma so she threatens divorce and takes the kids to her mom's, a possessive woman whose husband is a creep. While Marcela is there, Jarda is jailed for possession of a stolen car (he's a mechanic who's turned his garage into a chop shop). Benes, the urbane man whose car it is, befriends Marcela, and soon she has options. Jarda's mother and her mother push her in opposite directions. Jarda has animal magnetism, Benes offers security, and her own body and mind may be at cross purposes. The Cold War is over, Czechs are free to behave well or badly. What's best?