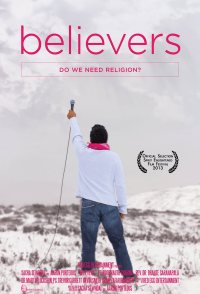 These days it seems that nothing is as polarizing and controversial as religious belief. Everywhere one goes it seems that people are asking the question: Do we even need religion? Is it limiting our understanding? What kind of world is being produced by these faith systems? Regardless of your answers to these questions, it is hard to deny that worship still plays an important role in many people's lives and many people simply do not understand where others are coming from. Believers is a unique exploration of those questions related to faith by focusing the lens on five of the world's belief systems, Agnosticism, and the new Atheism. The film follows Sacha Sewhdat's personal journey towards understanding as he searches for the value of religion in modern society. With honesty and objectivity Sacha explores what it means to believe in a higher power or what it would mean to let those beliefs go. It is a film that will both inform and challenge what you know about religion in the 21st ...