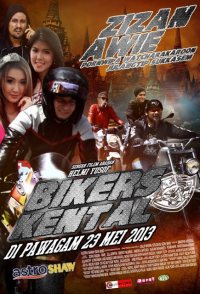 Bikers Kental is a comic tale of a man named Bidin Al Zaifa who embarks on a road-trip to Thailand with a biker gang, without any idea of what he is in for. A superbike enthusiast, Bidin manages to buy his dream bike after stumbling across a bag of money in a dead man's car. He is allowed into the biker gang that he had been trying so hard to impress, and joins them on a biker-trio to a famous motorcycling event in Thailand. The journey is replete with comic events as the inexperienced Bidin, having never been on a long distance biking trip, begins to struggle with keeping up. He comes up with various excuses to prolong their rest-stops, and when he meets the beautiful Saiya at a humble restaurant, Bidin digs deep into his bag of tricks and tactics to lengthen their stay there. his motives are realized by the rest of the group and Bidin is given two conditions to redeem himself; to get to the event in Thailand unaccompanied and with only a few clues written on the back of his hand; ...