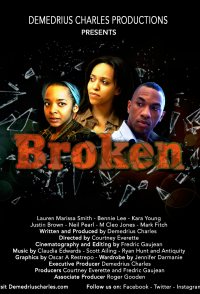 BROKEN portrays an emotionally strong and driven woman who loses her will to go on, when everything she has worked for is placed in the balance. Lisa, an international college student on the verge of graduating, experiences great financial hardship which threatens to derail her plans. While balancing jobs to pay for tuition and maintain an apartment in New York, Lisa also deals with a husband who is unable to keep a job and fend off a vicious and insecure female boss. The stress of it all contributes to a rapid deterioration of her resolve She meets charismatic Marlo, who after a few drinks engages her in a night of unbridled passion putting her marriage and dreams in jeopardy when an unexpected and unwanted pregnancy results.