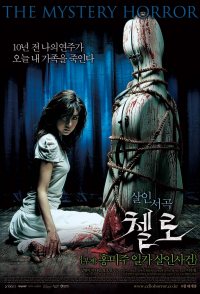 The cellist and teacher Mi-Ju Hong is invited by her colleague and friend Sun-Ae to assume the position of professor in her renowned institution, and gives an invitation to the concert of Hae-Young Kim, the little sister of her former school best friend Tae-Yeon Kim who died in a car accident. Before leaving the building, she is threatened by a former student that failed in her test. While driving home, she escapes from an accident on the road and once at home, she has a surprise birthday party with her husband and prosecutor Jun-Ki, her daughters the slow Yoon-Jin and the young Yoon-Hye Song, and her sister-in-law Kyung Ran, whose fiancée is in Manhattan in a MBA course. On the next morning, her husband hires the dumb housekeeper Ji-Sook, a very weird woman. While shopping with Yoon-Jin, the girl is fascinated in a cello and Mi-Ju buys the instrument. After the mysterious death of her dog Sunny, creepy events happen with Mi-Ju, jeopardizing her family, while she insistently listens ...