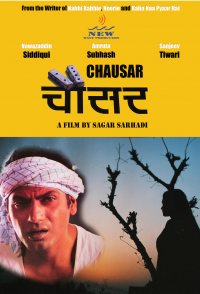 Ten thousand years ago, a conflict between two families led to a woman being put on stake and paraded naked in a courtyard. Times have changed since that incident in the Mahabharata. But the social status of women is still cringe worthy. From writer-director Sagar Sarhadi (Bazaar and Lorie) comes a bold attempt to unveil the reality of women in our society, inter-woven with bureaucracy and corruption that make the poor, poorer and the helpless, desperate. The Father's Verdict: Just after three pheras, Jasoda's (Amruta Subhash) wedding comes to a halt. The groom, Gojar (Sanjeev Tiwari), is replaced by his elder brother, Gajadhar (Nawazuddin Siddiqui) by Jasoda's father. Jasoda isn't given any other option. The Husband's Plight: Jasoda's husband, Gajadhar, is in search of a job. The greed of the powerful overshadows him, making him insecure and helpless. Gajadhar ends up selling everything. Even his Wife. The Arbiter's Decision: Jasoda is in Draupadi's situation when she finds herself ...