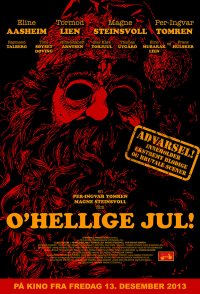 "O'Hellige Jul!" follows both a serial killer as he plans for his next kills, and the next set of victims he has set his sights on. As the group of friends we get to know prepare for Christmas in their own way we also follow the killer as he stalks and does his final research for this years Christmas cruelty. In the last act of the movie he invades the home of our group of friends to execute his twisted little plan as foreshadowed in the first act.