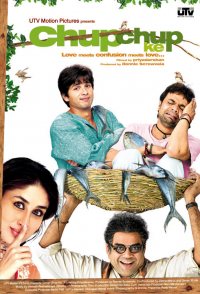 A young man named Jeetu finds himself in debt with his father receiving harassing visits from money-lenders. Although his father is scolded daily for his non-progress in their debts, his mother and his fiancée Pooja believe he can successfully fulfill his task and live happily, but burdened with high debt, Jeetu sees suicide as his only way out of the situation (insurance money for the family). Unfortunately for him, taking a plunge off a dock into a placid ocean doesn't kill him. He awakens in a boat with two very interesting characters, Gundya and his servant Bundya. In the cost of putting Jeetu in a hospital and saving his life, Gundya and Bundya believe Jeetu owes them a debt. Already in much debt , Jeetu decides to play off that he is deaf and mute. He then finds himself mortgaged to a wealthy man, Prabhart Singh in return for Gundya's confiscated boat and thus ends up as a servant boy at a mansion in Kolkata. It is here where he meets Prabhart's beautiful daughter Meenakshi and ...