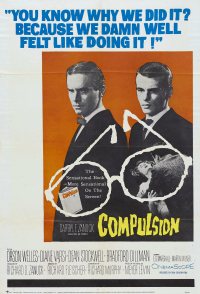 In 1924 Chicago, Artie Strauss and Judd Steiner are friends and fellow law students who both come from wealthy backgrounds. They have few true friends as they believe all their contemporaries are intellectually inferior. Within their relationship, Artie is the dominant and Judd the submissive who says he will do whatever Artie tells him. Although Judd acts intellectually arrogant to others, he also shows signs of weakness and reticence most evident to Artie. Part of their goal in life is to experience how it feels to do everything. As such, they plot to commit what they consider the perfect crime - a kidnapping and murder - not only so that they can experience the sense of killing for killing's sake, but also taunt the law with the knowledge of it and their superiority after the fact. They believe their crime is above the law. Their murder of young Paulie Kessler is not so perfect, with evidence at the scene uncovered by one of their law school colleagues, Sid Brooks, who also works ...