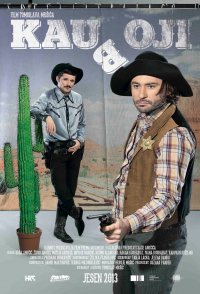 The film Cowboys is a comedy based on a Croatian hit theater play. It is a story of eight outsiders who are trying to create a theater play while breaking every rule of theater craft. Genre-wise Cowboys are between social drama and comedy with emphasis on clear stories and functionally profiled characters. The story takes place in a little industrial town, small and claustrophobic enough to make life in it impossible, and yet big and diverse enough to make the story and the characters convincing. SOMETIME LIFE CAN BE BORING, BUT WESTERN NEVER!