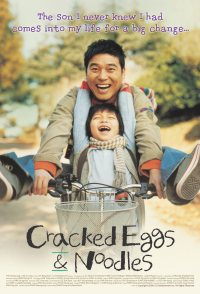 Dae-kyu works hard to contribute Korean music industry's development: unfortunately, this hard work is for an illegal distributor, dealing in pirated albums. His only hobbies are buying lottery tickets and pathetic attempts at hitting on women. Then one day, into his life of fakery comes something very real - a 9-year-old son he never knew he had. Chun In-kwon simply shows up one day at Dae-kyu's slovenly apartment, unannounced, telling Dae-kyu that he plans on living with "daddy" from now on. Dae-kyu cannot believe what he's hearing, but he realizes that there is a slight chance that this boy might be his, the result of his sad, first love from his university days. But Dae-kyu is not ready for his single life to end just yet, so he does all he can to return the boy to his mother. He does everything he can thing of - takes In-kwon to the police, offers him money, even just runs away - but nothing shakes the determined child. Finally, In-kwon suggests a deal: if Dae-kyu helps him ...