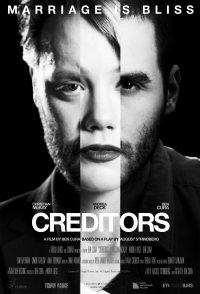 Actor Ben Cura's directorial debut "Creditors", based on August Strindberg's 1888 play, is a modern re-telling of Strindberg's story of love, betrayal, revenge and psychological manipulation, a "sometimes angry and surprising film that brings with it strong performances from the entire cast", "what a Terrence Malick film would look like in black and white", "an intelligent thought-provoking film which questions gender roles, female sexuality and male anxieties" and "an incisive and accomplished piece of filmmaking [...] possessing a rich, powerful psychology that instills an unnerving modern-day relevance to age-old material" - Grant Pierce arrives from London into Madrid, Spain, hoping to be given the chance to meet his favourite painter, American Freddie Lynch, who is currently staying at a private hotel in an unassuming location outside the city. As Grant steps into the main building of "El Madroño", he finds Lynch a crippled man whom, he soon reveals, has been unable to actually ...