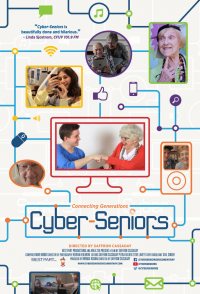 Proving you're never too old to learn something new, initially reluctant seniors discover the wonders of the world-wide-web with the help of their teenage mentors. Their exploration of cyber-space is catapulted to a whole new level when 89 year-old Shura decides to create a YouTube tutorial. This inspires a lively competition where hidden talents and competitive spirits are revealed. A heartwarming, candid and at times humorous exploration of the victories and challenges seniors encounter as they dive into the digital world.