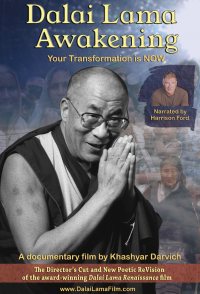 'Dalai Lama Awakening,' which was a 15 year realization of a cinematic dream, presents the profound and life-changing journey of innovative Western thinkers who travel to India to meet with the Dalai Lama to solve many of the world's problems. The result was an inner transformation of the participants, as well as what audiences report is a personal transformational experience for those who watch the film. Narrated by Harrison Ford and featuring His Holiness the Dalai Lama.