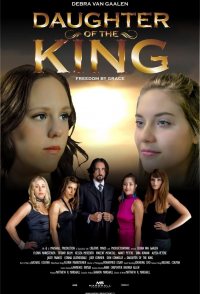 Daughter of the King is an independent dramatic film with Christian and moral themes that follows Ashley Miller as she tries to rebuild her life and move beyond the mistakes she has made in the past. After serving her sentence for possession for the purpose of trafficking, Ashley tries to rebuild her life. However she is in over head in a large personal debt she owes and it is standing in her way. Due to her inability to pay her outstanding debt it is not long before she is sucked back into the world of drugs and finds herself addicted again. She is forced into a lifestyle of being a debt slave and working for Haydar who she owes money to. Under Haydar and his Assistant Angel's control Ashley now must work as a prostitute and trafficking drugs to work off her debt. While under their control Ashley is verbally abused and humiliated, lowering her self esteem to the point she feels she is worthless and deserves all that has happened to her. Nadia, Ashley's friend tries to help Ashley see...