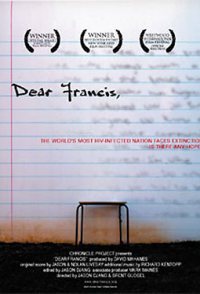 The UN has declared the small African kingdom of Swaziland to be the world's most HIV-infected nation with nearly 40% of its adult population carrying the virus. Experts say that within 50 years the Swazi people may become extinct unless profound change is realized. Shortly after the official declaration, Lance and Kelly, two Texas college students with high ideals, great hopes, and a bit of naiveté embark on a most unconventional AIDS prevention program to Swaziland. Dear Francis puts a face to the AIDS pandemic as it chronicles the personal stories of two strangers and the Swazis they befriend. Through these relationships, they discover that the causes of this plague are much more disturbing and complex than they could have ever imagined. Interspersed in the story are interviews of local and international officials working the front lines of the pandemic. Their insights and commentaries are some of the most enlightening and heart-wrenching interviews on the AIDS crisis to ever see ...