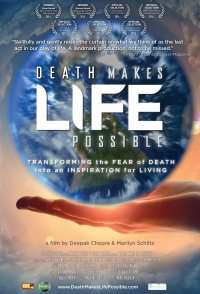 Death Makes Life Possible (DMLP) is a feature documentary film that takes the viewer on a beautiful journey through one of life's most feared experiences: death. Scientists, spiritual teachers, health professionals, scholars, children, and those who have had mystical near-death experiences share their stories with anthropologist, Marilyn Schlitz. She explores the mysteries of death and examines scientific research; ways to cope with grief; and considers the possibility that consciousness might survive after bodily death. Engaging in this exploration of the inevitable can help to transform the fear of death.