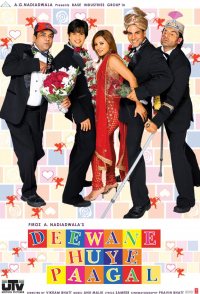 This is the story of Karan and Tanya. Karan is in love with Tanya but is too shy to tell her. One day Tanya witnesses the murder of a scientist by his evil twin brother, the underworld don Mehboob, and needs to flee the country. When Karan's friend coaxes him to track Tanya after she migrates to Dubai, he enlists the aid of a deceptive investigator, Rocky to track her down. Rocky ends up falling in love with her at first sight and tries to stop Karan from wooing her. Meanwhile, Tanya's physically disabled friend, Sanju also has a soft spot for her and tries thwarting Rocky's attempts at getting close to Tanya. The plot thickens when Don Mehboob and his gang track Tanya down in Dubai.