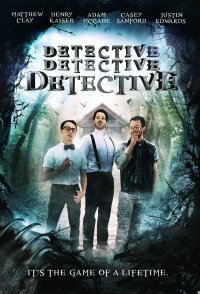 Detective Detective Detective is a comedy about three brothers who spend a week in the Alaskan wilderness playing a live action role-playing mystery game. All in their late 20's/early 30's, they've lost touch over the years -- partially due to general "adulthood," but also due to some past grievances that took root and allowed bitterness to set in. Set against a majestic Alaskan backdrop, the brothers improvise their way through a mystery set up by a Game Master. They play detectives tasked with investigating the mysterious disappearance of world-renown, reclusive author, Adrian Belmont, who vanished while researching Inuit mythological creatures called Qalupaliks. As the detectives are challenged with increasingly difficult puzzles within the game that take away their senses (vision, hearing, talking), they are forced to rely on one another, and find their real-world conflict coming out in the game's world. In the end, in order to find the missing author, they must first find their ...