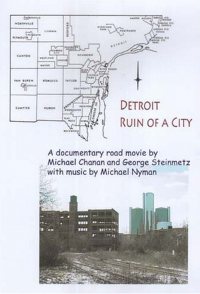 Detroit, known as Motor City, once the fourth largest city in the United States, home of the Ford Motor Company, General Motors and other major car manufacturers, is nowadays a city in serious decline, which has lost more than half its population and much of its real estate. Until recently, residents would celebrate'Devil's Night' on the eve of Halloween by going out and setting fire to dilapidated buildings. Houses, factories, stores, office blocks, theatres, even the railway station, stand in ruins or have disappeared altogether, leaving vast empty lots that have returned to nature. The home of Motown music, Detroit is also the most segregated major city in the United States, and one of the poorest, struggling to provide public services for its needy inhabitants. This film looks back over the history of the city in the twentieth century: over the rise and fall of the social system identified by sociologists as 'Fordism'; the way the city was shaped by the automobile; and its decline...