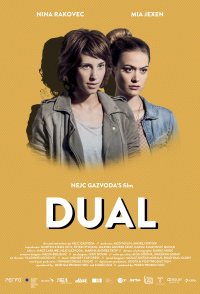 Due to a weather problem a plane from Denmark is forced to land at the Slovene airport. Amongst the passengers, being taken to a hotel in Ljubljana, is a quiet, beautiful young Danish girl Iben (25). This is how she meets Tina (25) who drives a shuttle as a summer job. They both need each other, but are very careful because one of them is hiding a secret. They speak to each other in English and in their native languages. Only one of the two languages has the so-called dual, a special grammatical form used in expressions that involve just two subjects. The other language does not. Dual is an honest story about two people who meet precisely at the moment when they absolutely should not have - but they are nevertheless a bit happier because they did.