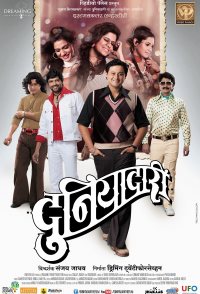 Shreyas Talwalkar gets admitted to a college where he meets DSP, a rookie guy in the college who is the leader of a gang, after sometime they become good friends. There is also another gang leader Sainath who has rivlary with DSP. Meanwhile Shreyas sees Shireen a newcomer girl and falls in love with her at the first sight. Dsp is having an affair with Surekha who is studying in his college. When a guy tries to propose Surekha, DSP beats him and during this fight, Shreyas gets caught by Inspector Inamdar and gets slapped by him. when Dsp and his gang sees Inamdar's daughter Meenakshi in the college, they plan to avenge Shreyas by making Meenakshi fall in love with Shreyas. Their plan succeeds but Shreyas doesn't love Meenakshi, while Shreyas and Shireen are in love with each other. Shreyas is suffering from somekind of Nasal disease. Surekha gets married and DSP gets completely broken. Shreyas comes to know that Shireen's marriage is fixed with Sainath. Meanwhile Shreyas tells ...