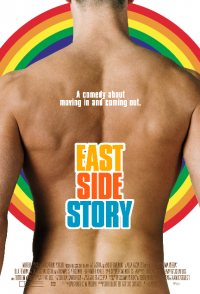 East Side Story is the story of Diego (René Alvarado), a young, closeted Latino, who helps his grandmother (Irene DeBari) run the family restaurant while carrying on a relationship with equally closeted Pablo (David Berón). Diego has long felt trapped by the conservative culture of East LA and plans to move away and open an upscale restaurant, hopefully with his lover, but Pablo views their relationship very differently - a point driven home when he begins dating Diego's Aunt Bianca (Gladise Jimenez). At the same time, Wesley and his boyfriend move in, gentrifying the neighborhood. The attraction between Wesley and Diego is immediate and electric, forcing both men to reexamine their state of affairs.