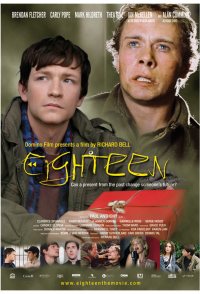 Pip is a street kid who's meeting life head-on in the big city. On his eighteenth birthday he receives his grandfather's World War II memoirs on audio cassette, a gift that awakens the ghost of the long lost world. His grandfather relates the story of the day he turned eighteen, fleeing German forces through the woods of France with a dying comrade hanging on for life. In Pip's own and contemporary way, he begins to live the parallel life of his grandfather, both lost in their environments and generations. Along Pip's path he stumbles into an unlikely alliance with Clark, a gay street hustler on the make, and Jenny, an aspiring social worker who tempts Pip with feelings of love and domesticity. He also forges a small but important relationship with a local priest, in whom he confides his deepest secret: the death of his brother and the heinous act his father committed against him before his death.