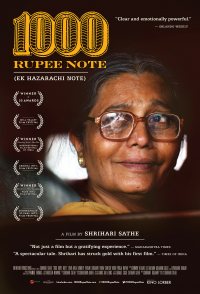 Budhi an old woman living in a small village her young son committed suicide due to debts in a debt ridden farmers village.She is good friends with her neighbor Sudama they both go to a political rally where the politician distributes 1000 rupee notes.Budhi receives four of of those when politician finds her son committed suicide.Budhi's daily expense was of 10 RS she feels that after receiving the money no one will sell her goods at low prices as they did and afraid of being robbed.She along with Sudama goes to market for shopping but can't exchange the note due to change.Finally they reach a shop to purchase Saree for her where they could get the changes.Butbowner gets then arrested claiming it to be fake note.