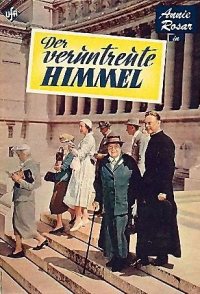 This is a story of human struggle for eternal happiness. Teta Linek, a cook at a noble Austrian family Argan, thinks primarily of ways to achieve heavens in the afterlife. In the hope of merciful acts, she helps her nephew, Mojmir, become a priest and sends him a lot of money for years. The problem is, however, that she does not meet him for a long time. But once, when he writes to her about his graduation in seminar, Teta, in her naiveness, travels to Hustopec to help him on his first parish. There, the truth is revealed - Mojmir is not a priest, lives in Prague, and spends the money on something entirely different. Teta starts to blame herself for naiveness and selfishness in heading for her personal happiness. In her despair, she pilgrims to Rome where she hopes to get a redeeming blessing from the Pope. To her relief, the whole group takes part in the audience at Pius XII. Soon after, Teta falls ill and having been rewarded by the Holy Father, she dies full of hope to get a ...