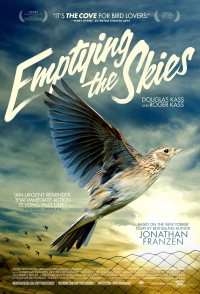 Based on a magazine essay written by noted best-selling novelist Jonathan Franzen for 'The New Yorker' and widely republished around the world, 'Emptying the Skies' chronicles the rampant poaching of migratory songbirds in southern Europe. Songbird populations have been drastically declining for several decades, and a number of species face extinction imminently. The film explores the wonder of these tiny globe-flying marvels, millions of which are unlawfully slaughtered each year for large sums on the black market, and follows an intrepid squad of pan-European bird-lovers who risk their lives waging a secret war against poachers, disrupting illegal trapping and freeing as many birds as possible. Jonathan Franzen is executive producer of and featured in the film.