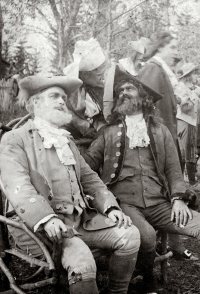 PART I: Evangeline and Gabriel as children are being taught their lessons by Father Felician, priest and pedagogue. After their lessons they hurry to the forge of Basil, the blacksmith, to watch him at his work. Thus passed a few swift years and they no longer were children. Gabriel, a "valiant youth," helps his father, Basil, at the forge; Evangeline keeps house for Benedict, her father. We see Evangeline carrying a flagon of home-brewed ale to the reapers in the fields at noontide. We see the prayerful attitude of the reapers and Father Felician as they bear the Angelus. At eve the flocks return from pastures and "the cows patiently yield their udders unto the milkmaid's hand." "Thus at peace with God and the world, the farmer of Grand-Pre lived on his sunny farm." PART II: In part two the Arcadians are still enjoying their happy, peaceful life, but a shadow of gloom is thrown over them at times by the advent of English troops with a proclamation from Governor Lawrence commanding ...