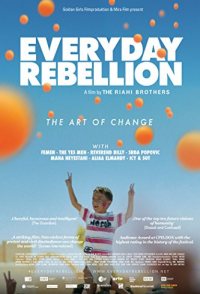 Everyday Rebellion is an impressionistic documentary essay as well as a web platform about non-violent forms of protest and civil disobedience in the 21st century. A project about methods of resistance supported by technology, seen not only through the current movements of the Arabian and Iranian uprisings, but also through former successful and less successful revolts. The film describes the everyday conscious and subconscious of resistance of societies fighting suppression and repression.