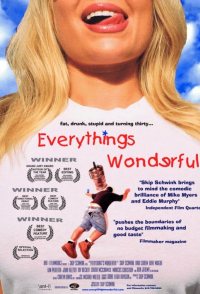 Everything's Wonderful is the sorta true story of seven friends in middle class America. Taking place over a chaotic twenty-fours this group of misfits gather to celebrate the birthday of one of their own only to end up stepping into the rest of their lives. Spencer dreams of one day writing adult films. His twin brother Tyler is done with the swinging playboy lifestyle and now longs for true love. And while Jack's busy running his landscaping company that he uses as a front to sell weed his girlfriend Jessica just might be pregnant but is it Jack's baby? Cheetah is on the run from a large female whose cat he accidentally killed. Pancake is married but that doesn't stop her from being the town ho. And all poor Larry wants is a drink on this his thirtieth birthday.