Fact or Fiction: The Life and Times of a Ping Pong Hustler ratings (Movie, 2014) 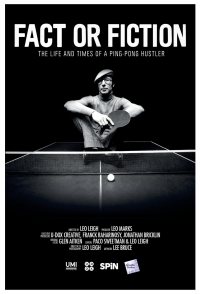 Fact or Fiction: The Life and Times of a Ping Pong Hustler is a chronicle of the final three years of Marty Reisman's life, a former international table tennis champion-turned-money player. Pursuing notoriety through his idiosyncratic lifestyle and motivated by his love of fame and Ping Pong, he inadvertently has to face his biggest fear: mortality. Shot over three years, the film follows Marty - a complex mix of childlike excitement, eccentric narcissism and constant charm - as he negotiates between pride, the denial of old age, past defeats and the decline of his fame and fortune, as well as his devoted wife Yoshiko's health, all while clinging onto the hope that his own life and career are just beginning to blossom. The film's observational style, combined with rare archive footage and interviews with key New York and London society characters such Booker Prize winner Howard Jacobson and eminent psychotherapist George Weinberg, work to tell the story of one of America's greatest ...