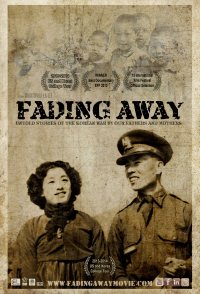 Fading Away showcases a series of never before told stories from a group of unique Korean War veterans and refugees through a series of insightful interviews and the use of rare historical film footage, photos and other archival material. These veterans and survivors share their stories in their own words with their sons, daughters and grandchildren with memories of catastrophe, fear, and the pains they vividly remember. The film is divided into seven parts, strung together and led by the powerful recollection of the journey of a 13 year-old Korean War orphan who fled the North to the South as he recalls his memories and emotions of the war. The film also showcases a love story of an American couple who met during the Korean War, as well as the unique perspective of several female soldiers who for the first time ever now share their humorous and very personal emotional moments during the war and its impact on their lives today.