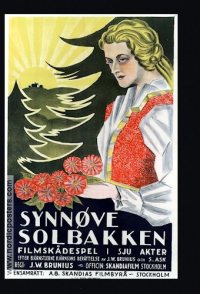 Synnöve lives with her parents at the farm Solbakken on a sunny hill. Thorbjörn, who lives at Granliden in the shadow of a big mountain, often looks wistfully up to Solbakken. As teenagers they meet and fall in love. Another boy, Knud Nordhaug, is also yearning for Synnöve. Together with some companions he bullies Thorbjörn, who knocks them down. When Knud meets Synnöve's father, he gets him to believe that it is Thorbjörn who is the bully. Synnöve's parents forbid her to meet Thorbjörn henceforth. Some years later Knud proposes to Synnöve, but is turned down. At Midsummer Eve Thorbjörn and Synnöve meet secretly. They renew their love-vows, and Thorbjörn promises to develop a better reputation in the village. When Thorbjörn is driving a loaded cart to the town, the wagon breaks down. As the Nordhaug farm is nearby, he goes there to lend a new wagon. Knud sees Thorbjörn and starts a fight. When Thorbjörn turns away, Knud stabs a knife in his back. For many weeks Thorbjörn hovers ...