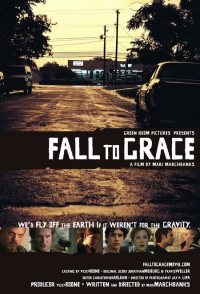 An irate father throws his son's basketball out the window. Follow it to a new girlfriend. A spoiled brat speeds off in her boyfriend's car. Follow it to a bad idea. The good girl is saving up for a plane ticket.Follow her as hope takes off. Fall to Grace, a debut film by Mari Marchbanks, has a taut script with an epic heart. Kristofer, a Russian-Georgian emigrant, is trying to make his way in a new country, a new school and onto the varsity team. Living under the weight of his father's anger and economic hardship, Kristofer keeps himself afloat with a basketball and a flirtatious spirit. But when Sarah flirts back, Kristofer begins to realize he may have come on to the wrong girl. Sarah has her hands full trying to keep her random drug use within the range of an excusable cry for attention, but it's quickly becoming a real problem. Like so many troubles, a stack of money would go a long way toward making things better, but the only available cash lies in a shoebox at the bottom of ...