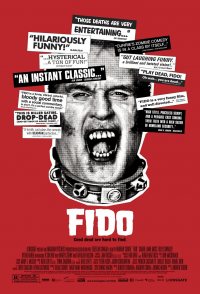 In an Earthly world resembling the 1950s, a cloud of space radiation has shrouded the planet, resulting in the dead becoming zombies that desire live human flesh. A company called Zomcon has been able to control the zombie population. Zombies can be temporarily neutralized by being shot, but can only be permanently neutralized by their brain being destroyed. Their ultimate disposal is through cremation, or burial, the latter which requires decapitation with the head being buried separately from the body. Conversely, Zomcon has created the domestication collar, when activated and placed on a zombie makes the zombie controllable, and thus an eternally productive creature within society. Because all dead initially become zombies, the elderly are viewed negatively and suspectly. And all people, adult or child, learn to shoot to kill to protect society. Zomcon is the go to organization for all things zombie. In the town of Willard, the Robinsons - father Bill (Dylan Baker), mother Helen (...