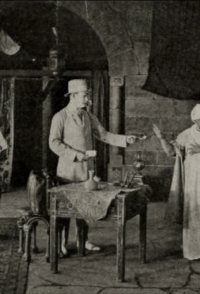 The story opens at General Feversham's residence at the annual dinner that he gives to the ones who are left of the Crimea officers. At this dinner, Harry Feversham, the General's only son, a boy of fourteen, is a guest. After the dinner is finished they tell stories of what happened in the Crimea, and Harry listens intently. The story is carried ahead about ten years when Harry is a captain in the army, showing him with his friend, Captain Durrance. They are both in love with the same girl, Ethne Eustace, and Harry and the girl after a time become engaged. Harry gives a dinner to his brother officers, Captain French, Lt. Willoughby and Captain Castleton, to announce his engagement. During the dinner Harry receives a telegram saying the regiment is ordered on regular service. Harry does not show his fellow officers the telegram as he should have done. They see him throw it into the fire. After they have gone, Harry determines to give up his commission, fearing that when put to the ...