Frankenstein vs. the Creature from Blood Cove ratings (Movie, 2005) 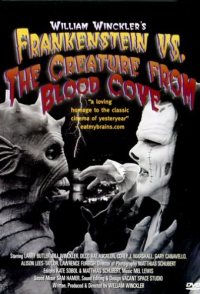 Near an isolated beach on California's coast, a sinister plan is underway in a laboratory of horror. Three renegade scientists have resurrected the Frankenstein Monster. . . legendary indestructible dead man come to life. . . and they have also created a biogentically engineered half-man, half fish abomination. . . to use as secret weapons in the fight against terrorists worldwide. However, disaster strikes when the terrifying monsters chemical brainwashing fails and the entire plan goes to hell! Instead of stopping terror, these invincible monsters spread terror! The first victims. . . young people on a glamour photo shoot are attacked by the amphibious beast of evil! Rescued and held hostage by the scientists, the survivors must find a way to escape the madmen and the monsters!