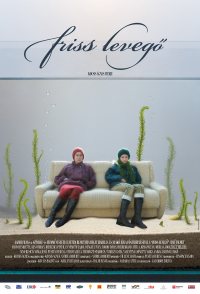 Fresh Air is about the tensions between a teenage daughter (Angela) and her single mother (Voila). Voila is a hard working toilet attendant in a metro station in Budapest, Angela a school student aspiring to be a fashion designer. Though mother and daughter hardly speak to each other, they sit down for watching their favorite sitcom. Angela can't stand Voila due to her job, as soon the mother comes home the daughter opens all windows as a sign of her detest against her mother's job.