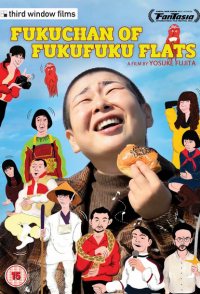 32-year-old Tatsuo Fukuda, nickname "Fuku-chan" (Miyuki Oshima), is a painter who lives in a run-down apartment complex called Fukufuku Flats. He has been a resident ever since he moved to Tokyo after graduating from junior high school in rural Tochigi Prefecture, and has held the same job the whole time. He spends his days working up a sweat painting buildings, his nights mediating disputes between the other denizens of Fukufuku Flats, and his days off flying handmade kites down by the riverside. Fuku-chan is a popular guy who treats everyone equally and with kindness, but romance is his Achilles heel, which causes him to totally mess up a date arranged by his workmate Shimacchi (Yoshiyoshi Arakawa). One day, an unfamiliar woman turns up at Fukufuku Flats. When she tells Fuku-chan her name, he is astonished. It is Chiho, his first love from his junior high school days who he has not seen for around 20 years, and she has come to apologize for something that happened in their past. As ...