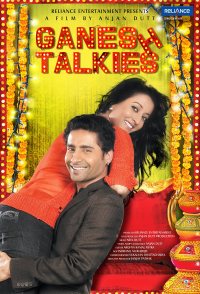 Pashupati Ghosh (Bengali) and Pravin Agarwal (Marwari) are childhood friends living in the older part of Kolkata. Pasupati's ancestral business is in the doldrums. His only possession is his huge mansion, which the local promoter Sharma is after. Builder Sharma has employed the local hoodlum Keshto to forcibly vacate Pashupati's mansion. Pravin's ancestral business of manufacturing crackers is doing well. He also owns a cinema hall called Ganesh Talkies which is almost defunct. Pravin's NRI brother Navin, who has lost his job in the US is back and is secretly making a deal to sell Ganesh Talkies to builder Sharma and open up a restaurant. Sharma is using Navin to help him get Pashupati's mansion too. Pasupati's daughter Saban is getting married to a young NRI called Nicky from Boston. Pravin is bearing most of the cost. Parvin's carefree, unemployed son Arjun, is like Saban's brother who is taking care of all the arrangements such as catering, the construction of the shamiana, sending...