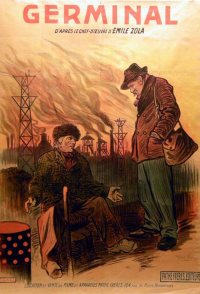 The mechanic Etienne Lantier is a competent workman out of a job, whose tempestuous disposition is more than atoned for by a good heart. With bundle in hand he looks for work from town to town and in vain until he comes to the coal mines of Montsou. Luckily for him there is a vacancy because of a workman being absent, and the foreman, Maheu, hires him at the suggestion of his daughter, Catherine, who dressed as a man is wont to work like a man in the mine. Lantier creates an impression on her and she takes his part much to the chagrin of her accepted lover, Chaval, an unworthy and violent man. Lantier fails to recognize her as a woman until after sharing her lunch with him in the depths of the mine, her hair falls from under her miner's headgear. From that moment he devotes his whole heart to her. At the end of the day's labor Lantier, who has excited a fierce jealousy in Chaval, is invited by Maheu to become a boarder at his house and he joyfully accepts. The engineer, Negrel, making...