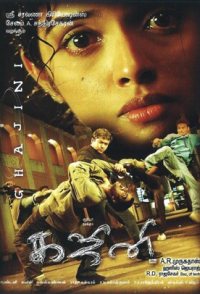 Spunky and compassionate Kalpana rents an apartment and works as an ad-model. Her life changes when she invents a love affair between herself and wealthy Sanjay Ramaswamy. When Sanjay finds out, he decides to confront her to end this facade, but ends up falling in love with her. He pretends to be poor, proposes to her, and she subsequently accepts. Before they could get married, she gets killed, Sanjay gets assaulted, resulting in memory loss, and he is unable to remember anything beyond 15 minutes. During those 15 minutes, Sanjay manages to put together bit by bit through tattoos, Polaroid photos, notes, and maps on the wall of his apartment whatever he is able to recollect, as he sets out to avenge Kalpana's death. Sanjay does not know that the elusive killer knows about his agenda, and has already made plans to finish him off once and for all.