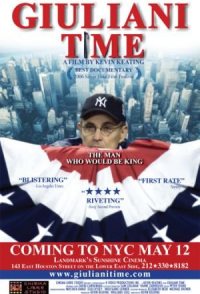 Ever since the events of 9/11, Rudy Giuliani has become a name recognized the world over. His role as mayor during that catastrophe elevated him to the status of an international hero. He went on to be Time magazine's "Person of the Year," receive a knighthood from Queen Elizabeth and become a key fund raiser and energetic campaigner for the Bush/Cheney administration. Over the last year his name has been rumored as a popular choice for not only senator and governor but as America's envoy to the United Nations, the new director of the CIA and a number of other high-profile positions. He is also talked about as a favored candidate for the 2008 GOP Presidential nomination. But what defined "America's Mayor" before he was catapulted to a kind of secular sainthood? During the only years Giuliani held office as an elected official, what was his record like? What was behind a Republican "New Urban Paradigm" in an overwhelmingly Democratic city? During the peak years of the late 1990s, the "...