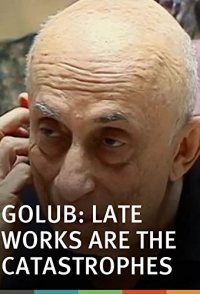 The work and times of American artist, Leon Golubfrom 1985 to his death in 2004, taking us from images of interrogations and torture to the ironies and dark humor of old-age. Over-sized canvasses with screaming mercenaries and rioters urinating on a corpse; photographic fragments used as information and inspiration; the making of one of Golub's death-squad series from start to finish and to its exhibition in Derry, Northern Ireland; news footage from around the world; museum-goers' responses; disturbing music: out of these disparate elements the film creates a dialogue between image and audience that reflects what Golub calls the "disjunctiveness" of modern life. In the aftermath of September 11, and with the photos from Abu Ghraib prison scandal, Golub's ferocious, monumental work of the 70's and 80's (used to this day by human rights groups such as Amnesty International) remain prophetic and essential, even as they give way to the snarling dogs, erotica, and wise-cracking ...