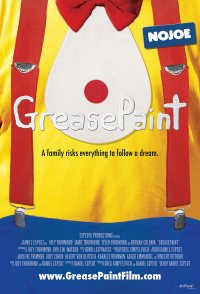 GreasePaint is a documentary film by Daniel Espeut that follows Joey Thurmond and his family as they travel around the country performing the art of American circus clowning. The movie resurrects the dying art of clowning demonstrated by Joey's love for the craft and makes sure that people see the human side of clowning. While the over-arching story focuses on Joey and his ability to balance the business and family life, the viewer also hears from circus performers, old and new, discussing the positive and negative connotations that people have of clowns. Having started the clowning full time, Joey Thurmond has put his life savings and police pension into his ultimate passion. He overhauls the new show completely with a new background, traveling set, and living quarters. The family starts the year not knowing whether they will have enough money to make it back home from the road. His wife, Jamie, manages a lot of the day to day affairs and keeps the peace in the family. Joey's son, ...