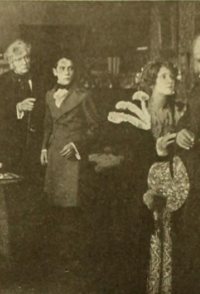 "Pip," an orphan, lives with his sister, whose husband runs a country blacksmith shop. The boy's life is a drab one until, in an effort to escape his sister's wrath, he runs into a graveyard where he is seized by an escaped convict, Provis, who threatens him with instant death if he does not give him food and a file with which to remove the ball and chain from his ankle. Pip does as he is bid, only to have the convict captured and brought to the blacksmith shop, when poor Pip nearly expires for fear he will be apprehended. But the grateful Provis lies to save him. The next step in the history of Pip is the arrival of Mr. Jaggers, a London lawyer, who is so struck by his gentility that he selects him as a companion for Estella, the adopted daughter of his client, Miss Havisham, a most secretive and peculiar woman. The companionship of the two youngsters ripens into love as they grow older, until Pip learns to his dismay that Miss Havisham has deliberately encouraged them with the ...