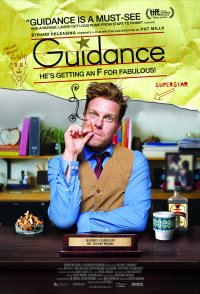 David Gold, a former child actor with a modicum of fame from that time, is now a thirty-something burnt out shell of a human being. An overgrown adolescent with a warped sense of reality and of his life (including not being sexually active, he probably a repressed homosexual, being gay which most people just assume about him upon meeting), he's broke, can't keep any job due largely to his excessive drinking, has long severed ties with his parents and has just done so with his older sister Ginny in her pleas for him to get professional help for his psychological issues, and is on the brink of being homeless unless he immediately comes up with back rent. On top of everything, he is in denial about a potentially life threatening medical diagnosis. To get rent money and as he feels his purpose in life is to help teenagers being one emotionally himself, he, "borrowing" the identity of a real life counselor he finds online, applies for an immediately need to be filled high school counselor ...